On Peace Day, 19th July 1919, the Town Hall was burnt down during a riot by ex-servicemen unhappy with unemployment and other grievances. The riot started after members of the council arrived to read out the King’s proclamation and many in the crowd expressed their disapproval. Tension boiled over into violence and a number of protesters broke through the police line and forcibly entered the town hall. Shortly after a number of violent clashes took place, with the town hall being stormed by the crowd and eventually set on fire. [The full description of the event and more details of what occurred can be found on Wikipedia: Luton Town Hall and libcom.org: the-luton-riots].  To commemorate the 1919 Peace Riots, Cultural Histories CIC are already working with the partner organisations identified in the side panel, individuals and local community groups in Luton to develop a range of projects that promote awareness and interest in the 1919 Peace Days riots via a programme of learning and the performing arts.

Reprint of “Where they Burnt The Town Hall Down” 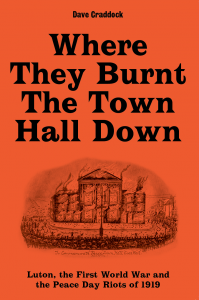 In collaboration with The Beds & Luton Community Foundation, London Luton Airport Community Fund and the Heritage Lottery Fund Cultural Histories CIC have arranged for an updated version of Dave Cradock’s definative book “Where They Burnt the Town Hall Down – Luton, the First World War and the Peace Day riots of July 1919” originally published in 1999 by The Book Castle, to be reprinted as part of the 2019 centenary commemorations of the Luton Peace Day Riots.

Copies of the book can be purchased via this website. 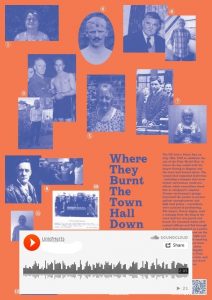 Family stories about the Luton Peace Day Riots.   Throughout March and April 2019, a small team of volunteers collected stories about the Luton 1919 Peace Day Riots. Trained volunteers collected family stories / memories about the riots. They were interested in as many stories as possible, no matter how small; they wanted to hear what people did on the day but also what they did during the war and after the riot. It didn’t  matter how small the story was – the important part was that it was a story and it contributed to the archive of the events of July 1919 that could be stored for future generations to enjoy and research.

Interviews took place in Luton Town Hall or, if people were unable to travel, in their own homes. The interviews were recorded and are stored in an audio history archive at the University of Hertfordshire for future generations.

The results of those interviews can be seen and heard on Personal Histories section of this website.

Working with the University of Bedfordshire Cultural History CIC have produced a pamphlet – shown below – that summarises some of the stories. Free copies of the pamphlet were available at the many centenary events taking place in Luton over the summer.

Or download a pdf file version of the pamphlet

Musical performances by up to 1200 Luton school students on each Friday in June at Stopsley Baptist church performing music especially composed to commemorate the Luton riots and also a medley of World War 1 songs.

A great evening of entertainment of music composed by a local composer.  Performance will include a medley of World War 1 songs and an original composition based on the riots composed by a Luton composer.

Ticket information will appear in The Cultural Histories’ web site www.culturalhistories.org in due course.

The wonderful local composer Richard Sissons has produced a fantastic medley of World War 1 songs and also an original composition about the Luton riots.  He is working with the Luton Music Service and the school choirs which will culminate in four performances throughout June involving up to 1200 school children. This promises to be a very exciting event and tickets will be in great demand. Make sure you book your place at Stopsley Baptist church via The Cultural Histories’ website www.culturalhistories.org in due course.

The new song and the medley will be performed during the main commemorations that will be taking place in the Town Centre over the weekend of the 19th, 20th and 21st July.

Below is a recording of the performance of a specially commissioned song, telling the story of the 1919 Luton Peace Day Riots. The composer is the nationally renowned musician and composer Richard Sisson and the song is being performed by a choir totalling 1000 children from 10 Luton primary schools at the Baptist Church in Stopsley. The performance is part of the annual musical extravaganza, establishing school choirs across Luton that is organised by the Luton Music Service supported by the Arts Council.

…and the medley of World War 1 songs.

Explaining to the children the background to this summer’s events and the 1919 Luton Peace Day riots.

Led by the University of Bedfordshire’s Art and Design School, local school students will be able to take part in workshops around the theme of protest. Their work will culminate in a parade through Luton on the afternoon of Friday July 19th and their work will subsequently be displayed in various sites across the town.

Hedley Roberts and Noel Douglas from the University of Bedfordshire are renown artists in their own right; we are working with a number of Luton schools whose involvement is being co-ordinated by Gemma Kiff Head of Art at Bushmead Primary School. The workshops will run through the summer term and be based on the theme of protest. Ideas from movements such as Black Lives Matter will be used to help students design their own protest materials. It will be up to the students to identify contemporary themes that they which to feature in the parade. The work will be paraded through Luton Town Centre on the afternoon of the centenary of the riots; Friday 19th July. For updates details keep in touch via The Cultural Histories’ website www.culturalhistories.org

The Chiltern Learning Trust have produced material for use in schools around the concept of citizenship. They will be using information about the Luton 1919 Peace Day Riots to think about the concept of citizenship today and the lessons to be learnt from previous generations of Lutonians. The materials is now available to schools to download through this website; registration is required to be able to download the material.

Part of the Key Stage 2 curriculum for school children aged 10 and 11 years old is to learn about citizenship. Many of the themes prevalent in 1919 are equally valid today; themes such as democracy, citizen participation and protest. These learning materials will help schools link the theme of citizenship with events around the 1919 Peace Day Riots in a positive and fun way. They will also help school students become more aware of the history of their town.

In 1919, as the town hall burned, rioters danced in the street. In 2019, People Power Passion are returning to the very same spot. Six events. Five months. One extraordinary riot.

View the full programme of events on the People Power Passion section and the Timeline of Events page on this website. 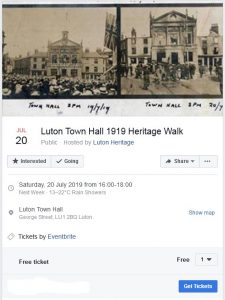 On 20th July 2019 Luton Heritage Walks will be conducting a walking tour of the very streets that contained the disorder that become to be known as the Luton Peace Day Riots – 100 years ago.

The 90 minute talk and tour will undertake an abridged version of a recent event that took in an escorted version of the new town hall building.

The walking tour on Saturday 20th July will :

BBC Radio 4’s World at One

On 19th July 2019 Steven Goodman featured on BBC Radio 4’s World at One discussing the centenary of the 1919 Peace Day Riots; in case you missed it below is a recording of the interview

Luton’s Peace Day Riots and the centenary celebrations were featured in Roberto Perroni’s programme on Three Counties Radio on Friday 19th July – the day of the centenary.

Luton’s Peace Day Riots 1919 and the centenary was featured in BBC’s “Look East” on Wednesday 17th July 2019 ahead of the comemorative programme of events planned for the coming weekend.

BBC’s The One Show

Luton’s Peace Day Riots 1919 and the centenary was featured in The BBC’s “The One Show” on Monday 10th July 2019 ahead of the start of the comemorative programme of events planned for the summer and autumn.

At the end of the First World War in November 1918 Prime Minister Lloyd George promised his government would ‘make Britain a fit country for heroes to live in’. Sadly this failed to materialise.

By Summer 1919 Luton ex-servicemen were unhappy with unemployment and other grievances, in particular the high handed attitude of Henry Impey the Mayor of Luton. A single incident lit the fuse and the disenfranchised men took matters into their own hands. In the ensuing riots Luton Town Hall was burned down in a fervour of protest.

The following productions are from an occasional series entitled ‘The Ballad of Bedfordshire’.

As detailed in The Luton News’ article on the 20th November 2019 Cultural History CIC held an End of Project Presentation event on Thursday 25th November in the University of Bedforshire’s School of Art and Design in Park Street, Luton. The evening started with a Welcome and Introduction to the whole project by Steve Goodman and Mike McMahon, directors of the Cultural History CIC followed by a short talk by Eureka Henrich from the University of Hertfordshire about The Family History Project, which now has over 4 hours of recordings of family stories by relatives of people involved in the Peace Riots that are being preserved on this website and at the University of Hertfordshire’s audio archive for future genertaions. Keith Miles followed by talking passionately about his father, Henry Miles, who was arrested and charged for his involvement in the Peace Riots. Richard Sisson, who as reported elsewhere on this site and working with The Luton Music Service, composed a new song telling the story of the Peace Day read his poem telling the story of the Peace Riots. Adrian Rogers, Chief Executive of the Chiltern Learning Trust and Dusna Chauhan, spoke about the Key Stage 2 (KS2) learning material produced under the project using the theme of the Luton Peace Riots to promote British Values and social responsibility. Noel Douglas from the University of Bedfordshire’s School of Art and Design spoke about the University’s involvement in the re-design and republishing of the definative book on the subject by Dave Craddock: “Where They Burnt Down the Town Hall”.

Although the centenary celebrations and the Cultural History CIC involvment have come to a conclusion these web pages will remain active for the foreseable future as a reference to anybody interested in the 1919 Peace Day Riots and the Centenary celebrations. Meanwhile Cultural History CIC have identified some new exciting projects to explore and bring to the attention of local people. Watch this space… 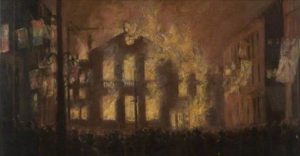 A specially commissioned new play written by Teresa Burns to commemorate the historic burning down of the town hall – the Peace Day Riots – in its centenary year.

It’s 19th July 1919. Three rioters are thrown together in a cell. As the riot rumbles on outside, these cellmates lament the horrors of their past and wrestle with an uncertain future.

Full of fight, fury, joy and pathos Keep The Home Fires Burning reflects on this famous night in Luton’s history and brings to life the unforgotten voices that rang out on George Street as the town hall burnt down.

The Luton Peace Riots were widely reported at the time. Several on-line versions of newspapers, both local and national, contain reprints of the original article:

Websites with details and background information relating to the Peace Day Riots include the following: 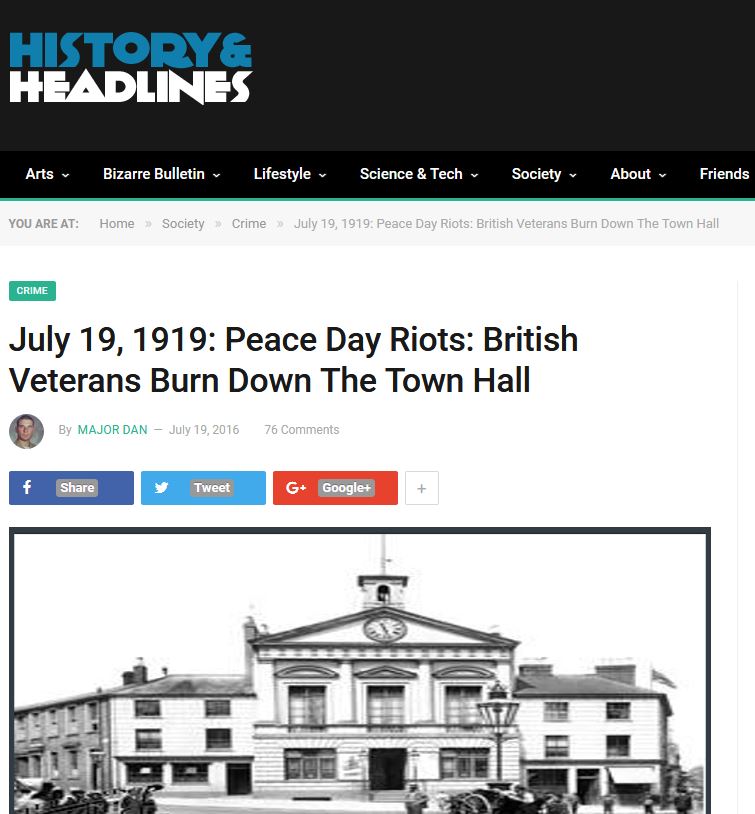 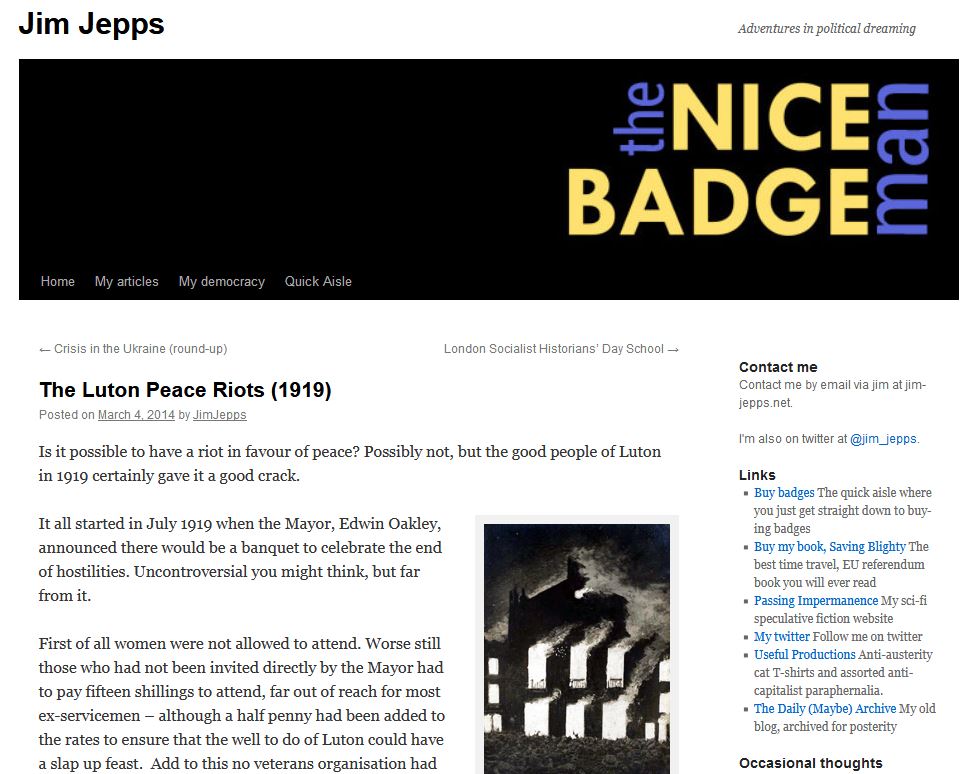 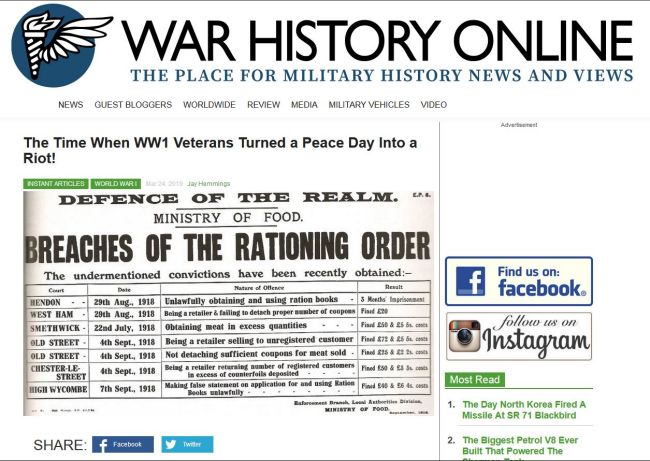 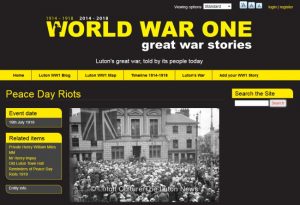